International Encyclopedia of the Social and Behavioral Sciences

‘Law and development’ refers both to organized efforts to transform legal systems in developing countries to foster economic, political, and social development and to the academic projects stimulated by these efforts. Begun in the mid-twentieth century, law and development’s dominant ideas and projects have changed over time as theories of development and agency priorities have changed. Law and development efforts accelerated in the 1990s as international financial institutions began to emphasize the rule of law. As the twenty-first century dawned, ideas and projects of the twentieth century were assessed and critiqued, new themes emerged, the field fragmented, and consensus disappeared. 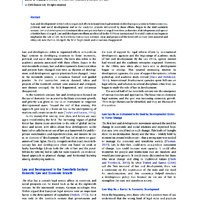