The regulation of campaign finance is a topic of perennial public concern in North America. The United States has lived through four decades of conflict over contribution and expenditure limits, which has only intensified since the U.S. Supreme Court’s decision in Citizens United. Canada has grappled with contribution and expenditure
restrictions for decades, though its Supreme Court has taken a more deferential approach. Mexico
experienced a spectacularly successful transition to multiparty democracy this century yet faces persistent concerns regarding corruption, agency capture, and powerful party elites. This article compares the campaign finance systems of Canada, Mexico, and the United States, drawing on the institutionalist strain of American election law scholarship. It has four objectives: (1) to provide an overview of the campaign finance laws in each country and the institutions responsible for implementing them; (2) to identify the challenges that each country’s campaign finance system faces; (3) to consider what Canada, Mexico, and the U.S. might learn from each other; and (4) to reflect on the broader institutional lessons that might be drawn from their experience. The American model presents the most dysfunctional of the three systems. The Federal Election Commission’s bipartisan structure leads to underenforcement of campaign finance rules, while U.S. constitutional law—which rejects equality as a basis for regulation—sharply limits the flow of money into election campaigns. The Mexican and Canadian regulatory models present a sharp contrast, with better functioning institutions that have embraced the goal of promoting a level playing field. Despite the differences, the three North American democracies face some common challenges in ensuring evenhanded implementation.
The article concludes with reflections on what these three countries might learn from each other, and the
broader institutional lessons for other countries trying to improve their campaign finance institutions. 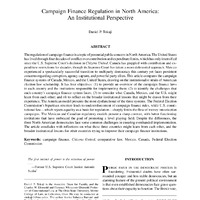