HAVA in Court: A Summary and Analysis of Litigation

HAVA in Court: A Summary and Analysis of Litigation

One of the most significant election-related developments of the last decade has been the more active role of courts in election administration. While some of these cases arise under the U.S. Constitution, others arise under election statutes. This essay surveys lawsuits involving the Help America Vote Act of 2002 (HAVA) during that statute’s first decade. It provides an overview of HAVA litigation, describing decisions that are exemplary as well as ones that are exceptional. It finds that courts have mostly deferred to state and
local election officials’ decisions on how to implement HAVA. The essay closes by considering what lessons might be learned from HAVA’s experience in the courts. 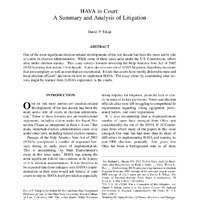